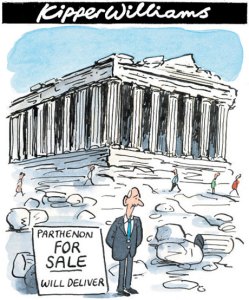 . . living beyond their means; sponging off everyone else. Lazy bastards got everything they deserve coming to them!

So runs the mainstream media around much of Europe but particularly in Germany where the hard working and fiscally frugal natives see Iron Chancellor Merkel’s handing over of ‘their’ hard-earned savings to the dissolute Greeks as nothing short of insanity – she is unlikely to win re-election as a result.

Has the mainstream media shaped your view of the pampered and spoilt Greeks as it had mine? If you are feeling less than sympathetic to that nation’s plight can I respectfully ask you to read on – you might be as shocked and appalled as I was when I learned the truth.

To those of you who ask what all this has to do with ‘Archers – living, loving and travelling Turkey’ I answer ‘They are our neighbours, they are in desperate straits and, if nothing else, they deserve our understanding.’

In October 1940, His Arrogance Il Duce Benito Mussolini dragged Greece into WW2 by invasion of its territory. After six months of humiliation and certain defeat at the hands of the tiny Greek army supported by a rag-tag resistance movement Hitler bailed his Axis partner by invading the country in April 1941.

Greece was looted and devastated like no other under German occupation. The International Committee of the Red Cross estimated that between 1941 and 1943 at least 300,000 Greeks died of starvation as a direct result of German plundering. Even Il Duce was appalled when he complained to his foreign minister ‘The Germans have taken from the Greeks even their shoelaces’.

Germany and Italy, in addition to charging Greece outlandish ‘occupation expenses’, obtained by force an ‘occupation loan’ of $3.5 billion. Hitler himself recognised the legal nature of this loan and had given orders to start the process of repayment. After the war ended, at the Paris Conference of 1946, Greece was awarded $7.1 billion by way of war reparations in addition to the repayment of the ‘occupation loans’.

To give some idea of the scale of German obligations to Greece consider the following: using an interest rate linked to an average for US Treasury Bonds since 1944 of 6% it is estimated that the current value of the occupation loan is $163.8 billion and that for war reparations is $332 billion – that’s a combined total as of July 2011 of 575 billion euros that Germany owes to Greece!

It wasn’t just ‘even their shoelaces’ that was taken from the Greeks. During WW2 Greece lost 13% of its population, some from fighting but most from famine and war crimes. The Germans murdered the populations of 89 Greek villages and towns, burned to the ground 1,700 villages with many of their inhabitants executed; the country was reduced to rubble and its antiquities and treasures looted.

Next time you see or read of Merkel’s demands for more Greek belt tightening, more austerity, remember that if her government coughed up and met its obligations as it is legally required to do there wouldn’t be any sponging Greek wasters out on the streets. There wouldn’t be any more Greek suicide deaths to add to the war time total either.

ps if you were surprised to learn these facts, put yourself in the shoes of all those decent people in Germany who have also been kept in the dark. Politics is a dirty game. There is a petition by Greek academics to call on Germany to make good on its obligations.