‘Blimey!’ I hear some of you exclaim. ‘I thought you’d blogged-off this mortal coil like that William Barker fellow who has ‘gone for the long rest’.’ Not just yet, mate – there’s life in the old blog yet!

A little while back (OK, OK, it was October last year) I wrote about Ali the zurna maker who intrigued and then delighted us with his enthusiasm for his craft. Well, J and I decided that we’d buy one of his beautiful creations to send as a gift to renowned saxophonist John Surman. John had seen the original post and had commented how much he appreciated craftsmen-performers like Ali who were indeed a dying breed. Some of you will know from previous postings that JS is family.

Anyway, in the end we bought two of Ali’s zurnas, which delighted him no end. It also delighted us because we know how much these things cost in places like Istanbul and Ali’s ‘country craftsman’ asking price was the reason we settled for two. J explained to Ali that his masterpieces were to be shipped to Norway where JS lives. A fair degree of lip-pursing and teeth-sucking ensued. ‘Well,’ exclaimed Ali, ‘hmm! I won’t be able to go there to fix up his reeds when he needs new ones.’ And he started to rummage about in his bags and tins of bits and bobs. He made up a kit of parts and spares (even down to little squares of sandpaper) that was to be sent with the zurnas. Then there followed a master class in reed making for us so that we could enclose written instruction to complete the kit.

Everything was packaged and eventually arrived, intact, with JS in Norway. To say he was delighted would be an understatement. So delighted, in fact, that he promised to write and play a piece with the zurna dedicated to Ali and all that he represents.

Below is that piece, played by John on one of Ali’s zurnas. He called it ‘A Song for Ali’s Zurna’. It is beautiful, haunting and very John Surman.

When lock-down here in Turkey is eased we’ll make sure that Ali gets copies of this and more information about who JS is and his standing in the musical world. Ali’s world is centred around a few villages up here in the mountains so I think he’s going to be amazed and delighted – how about you?

Alan, happy to be locked-down up here!

“A certain man once lost a diamond cuff-link in the wide blue sea, and twenty years later, on the exact day, a Friday apparently, he was eating a large fish – but there was no diamond inside. That’s what I like about coincidence.”
― Vladimir Nabokov, Laughter in the Dark

J and I wandered off to İstanbul last Friday. We were going to meet up with saxophonist John Surmanwho was doing a solo gig at the İstanbul Jazz Festival – JS is family and we don’t get to meet up as often as we’d like. This time around his schedule was more relaxed than is usual with these things and we were able to go for some essential shopping around the musical instrument makers’ places of business at the top of Tünel for odds and sods and, perhaps, a new ‘toy’ or bit of serious gear.

First stop was for a zurna, that quintessential Middle Eastern horn, with its most distinctive sound. We’d stopped by a particular shop three or four years earlier with Jack Dejohnette‘s ‘Ripple Effect’ group and Brazilian multi-instrumentalist Marlui Miranda who had been delighted to get her hands on her very own zurna.

Moving on, we were looking for a particular type of reed for some obscure horn JS had acquired some years earlier – we found some in the atelier/atelye/workshop of a saz and kemençe maker Oktay Üst. Turns out that Oktay is not just a master craftsman in wood, he is also a maestro of the kemençe with an international reputation. 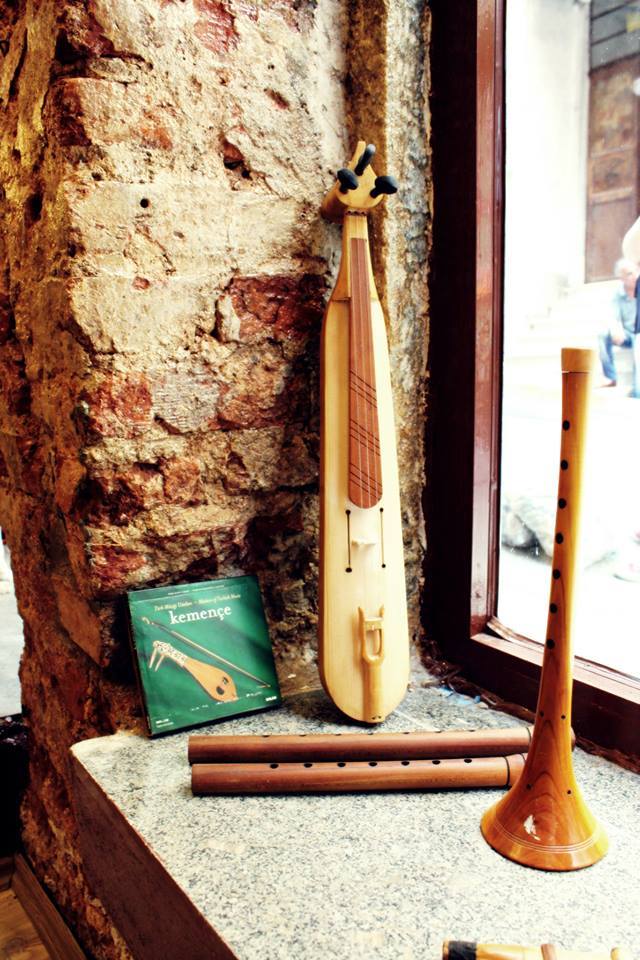 JS acquired a mey, Oktay launched into a mini-concert and there was hardly a dry eye in the house. Why? because people like Oktay are a dying breed – makers and players of musical instruments are being fast superseded by cheap, mass produced plastic and that should be worth a tear from any lover of artistry.

As an aside, it is amazing what happens when the craftsmen/sellers/shopkeepers realise that they are dealing with someone who can really play these things – rather than someone who wants a wall or table decoration. 30-40% discounts are given and extra reeds thrown in without being asked for. Before you get any ideas, you’ll need to know which end to blow into and demonstrate a bit more than the equivalent of ‘chopsticks’! Above left you can see a zurna, two meys, a kemençe and a cd all by Oktay.

So, moving on. We had just left Oktay’s place when we were accosted by three young people who appeared to be trying to flog us a cd of some sort.

We could not have been more wrong – JS suddenly spotted that the cd they were ‘offering’ was one of his and an encounter and a coincidence came together. It turned out that these folks had come from Tehran, Iran for a visit to friends and specifically because their jazz idol John Surman was performing at the festival. They had bought their cd locally as they are not available back home and they just happened to be walking down this particular street as JS came out of Oktay’s place – a Close Encounter of the Coincidental Kind and a perfect chance to get an autograph!

We were able to enjoy a little time with them and then meet up later at the concert which, I have to say, was yet another virtuoso performance that ended with JS playing an encore of jazzed-up folk tunes whilst wandering around the auditorium. To those who don’t know John’s stuff I’d say ‘You really don’t know what you are missing’. His output over the years has been prolific and varied – from jazz to choral to brass to . . well, you name it. (his website is here) J and I are lucky enough to have several class musicians in the family, it means we get to be at some of the best gigs around, not only that, I can’t remember the last time we had to pay! How cool is that?

To finish off here are a few photos: 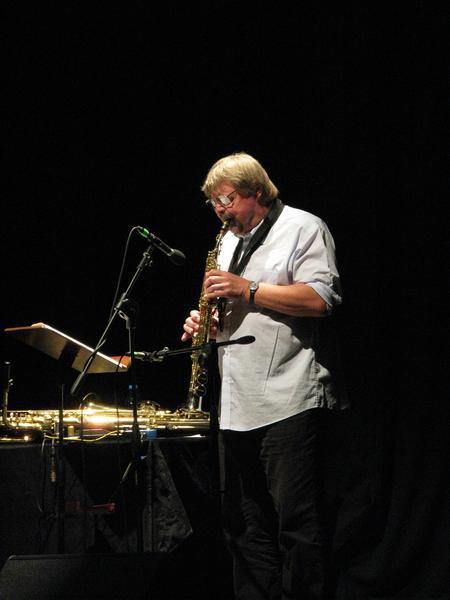