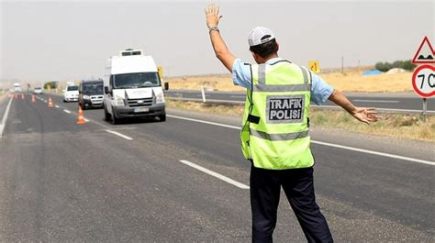 J and I were on our way up here to the cabin when we, along with others, were pulled over by the traffic police for a routine document check. It’s so routine here in Turkey that we expect it and are delighted when we are waved through and not over. In our more than 20 years of driving here we have been meticulous about all or documents and paperwork being in order because we really don’t want to fall foul of the bureaucracy here.

So it was with total disbelief that we faced the officer when he said there was a problem and that our mandatory third-party insurance was not on the police computer. We knew it had been dealt with back in December along with the fully comprehensive on the car and the house, contents and earthquake insurance – we knew it was done! There had been something about a delay with that piece of paperwork at the time but it’s not a problem because it goes onto the police computer immediately.

The two traffic cops could see that we were confused and adamant that it had been paid so they waited while we called our bank. More confusion for us so they spoke with the bank – even more confusion. Meanwhile, in desperation, I phoned our ‘son’ who a) is a ranking bureaucrat and b) speaks perfect English – could he help us understand what was going on. If this was not sorted our car would be impounded, put on to a low-loader and taken away with all the expense that that incurred.

He spoke with the police officer.

I want you to understand something here that throughout this incident the police were amazingly patient and polite. They explained again that whatever had happened at the bank the bank had not paid and obtained the mandatory policy for us. The bank had made a mistake but we were responsible for the vehicle. They said that our ‘friend’ (the bureaucrat) had asked them to help us if they could and they wanted to. So it was that one of the officers contacted an insurance agency, gave them all the necessary information and then asked for our credit card. That was a problem because we don’t have a credit card, only a debit card, so the payment couldn’t be accepted.

Well, not quite yet. Did we have enough in cash the officer asked – we did. ‘Problem solved’ he said – or words to that effect as he pulled out his own credit card and completed the transaction. We were flabbergasted! Speechless! These guys didn’t know us from Adam and were, after all, traffic policemen and everyone knows that these types are total, unmitigated arses. Bastards to a man and of such evil motivation that they are reputed to nick their own grandmothers given an opportunity! Give them a motorbike and they hunt in ravening packs à la France and Thailand. Yet here they were helping out two soppy old farts who, in their confusion, had made a cock-up with their car insurance.

As we thanked them they smiled broadly, shook our hands and asked us to let their bosses know that they had done their jobs to our satisfaction. Just one more thing one of them said, we should wait for a few minutes before leaving on our journey. In short order his phone rang and he walked over to show us the image of our new insurance on the police computer. Technology is amazing and so are some really decent people who hide inside traffic police uniforms! They didn’t even impose the usual fine that goes with this type of ‘oversight’.

Once on our way J phoned our bureaucrat ‘son’ and told him about the policeman using his credit card, he was amazed! She thanked him and asked what he had said to the policeman. He laughed, ‘I just told them you were nice people and they should help you if they could’. So we are but even so you really couldn’t make this up!

Alan up at the cabin

6 thoughts on “You Couldn’t Make It Up!”