There was a time when radios really were radios – calling them a ‘wireless’, as we invariably did back then (the 40s and 50s), was a total misnomer because there was more wire in a wireless than could be found on the beaches on ‘D Day’! Why we don’t call these modern, sleek, solid-state, ‘wireless’ radios a wireless is beyond me. Must be a generational thing! 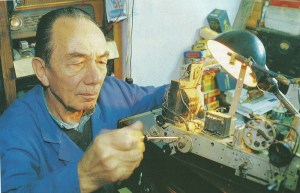 Anyway, what got me started on this line of thought was this – I was rummaging through some of my bits and bobs when I came across the story of a certain Nusret Berişa. Mr Berişa used to run a radio repair business from his workshop in the back streets of the Balat district in İstanbul. Mr Berişa was also a survivor from the long vanished age of steam radio. I say was because my notes are more than ten years old and this usta (craftsman) was of mature years even then. He would have nothing whatever to do with transistor radios – they were beneath contempt and, when broken, worthy of nothing more than the dustbin. The shelves of his workshop were stacked with old radios, some for sale, some awaiting repair. Alongside them were neatly stacked boxes of single and double-ganged tuning capacitors and dusty, fly-blown boxes of thermionic valves – you know, those things that look like strangely shaped light bulbs with equally strange names like ‘double diode triode’.

But I’m digressing, as normal; what I really want to talk about and show you is one of my most prized possessions after J, of course – my RCA Victor AR88 LF.

Built in 1936 in Montreal, Canada it was one of many that were confiscated from radio enthusiasts and shipped to Britain during the war to be used for radio surveillance and eavesdropping on enemy communications. In its many variations it found its way onto ships, submarines and planes; they were even shipped to Russia and China (before they too became the enemy). Those who know about these things describe the AR88 as the greatest communications receiver ever built and as I gaze at the battered, black-crackle front panel with its glowing dials of my beauty, who am I to disagree?

I acquired ‘her’ from a boffin who used to work for the UK Government Communications HQ in Cheltenham. He used to come into my village pub for a few beers and a chat as he went steadily bonkers – he gave me the radio one day and then disappeared.

When J and I moved lock, stock and barrel to Turkey the old girl came too, and I bet the removal guys remember her well because it took two of them to move her around safely.

Call me an old geek, but thirty five or more years on from the day she came into my life, I still can’t resist the urge on a dark winter evening to turn her on, twirling her knobs while she warms up a bit before gently lifting her lid to admire the amazing sight of her valves glowing orange and blue and yellow. As the sound of the RF begins to gently hum and buzz and the logs crackle in the hearth, I start to tune through the airwaves, ever hopeful that I’ll hear the opening announcement for ‘Much Binding In The Marsh’ or the sinister music of ‘Journey Into Space’.

Those were the days!

For those of you who arrived here expecting rather more than a load of old twaddle about a radio here’s Queen performing at their very best – enjoy!

Alan, not really of this world.