So, here we have it – the finale to this wonderful, enlightening trip. Salvaged from Archers of Okcular and originally posted February 2013.

Our last port of call on this ‘mystical’ tour is to the Çarşı or Marketplace Mosque in the village of Yazır Köyü some 14 kms SE of Acıpayam just a few kilometres off the D585 Denizli-Antalya road. There are family links through marriage between Acıpayam and my own village of Okçular. The town lies more than 150kms over the mountains at the far end of the track used for centuries by nomadic herders to move their animals from Denizli to winter pastures around here.

J and I arrived at the mosque shortly before midday prayers and there was time to sit under the magnificent plane tree and admire the proportions of this substantial, stone-built mosque. In fairly short order J was ‘discovered’ by one of the village ladies and whisked off to the quilting course being run nearby, which left me to drink tea and mumble and nod with the locals at the kahvehane.

Çarşı Camii is a fully functioning and very well attended mosque. With namaz over we were introduced to the imam who, as with every other place we visited, was delighted by our interest and very pleased to show us around and explain some of the history. 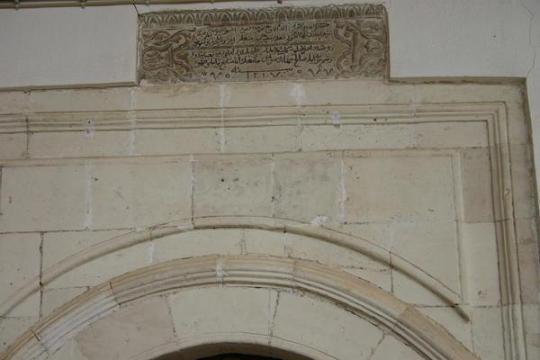 There is an inscription over the door that dates the mosque to 1802 and the endowment to Hacı Ömer Ağa. The front has an elegant portico and the door is flanked by two mihrabs. Inside, we were both astounded by the quality of the unknown artist’s workmanship. This was not the naïve brushwork that we had found in any of our previous visits and was more akin to that found in the painted konak in Birgi with splendid panels depicting various different flowers in vases and others of buildings. One feature stood out for me and that was the amazing alabaster plaster work window frames. Many had some or a lot of damage but enough were intact to convey an image of how the interior would have looked.

There is a mystical, other-worldliness to these places that has to be experienced – for me, a lover of fantasy fiction, it is like standing in a real live setting from Lord of the Rings or similar. I have no difficulty transporting myself back to a time when flickering candles provided light and adherents of Sufism practiced the Dhikr or Sema, moving rhythmically in a circle and chanting or singing their devotions.

I’ll leave you to your own imaginings as you browse through a few photos; I do hope you’ve enjoyed the tour.

Postscript: as J and I prepared to leave we were told that there was a wonderful cavern by the name of Keloğlan Mağarası on the way back to to the main road, so we took ourselves off to see it. At some point it looks as though there were considerable public funds expended on a road, a restaurant and an office or two. It was also evident that visitors were few and far between.

The guardian was ensconced behind his steamed-up window; there was a hand-written notice asking for three lira per person; J grabbed the tickets and stuck her cold hands back into her pockets. The guardian eyed my cameras with suspicion and pointed at the notice (no flash).  He obviously didn’t trust me because he insisted on following us inside the caves which, as it turned out, was not a bad thing.

Now, you know what these places are like – dripping wet with concrete and steel walkways and stairs. We had wandered about a hundred metres or so, ‘Ooohing!’ and ‘Ahhhing!’ when it happened – power cut, all the lights went out and nobody had considered any emergency back-up! We froze where we were on the steps surrounded by a Stygian blackness, listening to our breathing and the dripping of water – we could see nothing. Then a voice from the darkness asked ‘Sizde bir çakmak var mı?’ ‘Have you got a lighter?’ Bloody hell! Truth to tell we don’t smoke and it hadn’t occurred to us to bring one, so we held on to each other as the sound of shuffling footsteps faded away replaced by the eerie, high-pitched squeaking of bats. It took a while but the fellow eventually returned with a torch with about two minutes of life left in the battery and led us out.

So, we never did see the cave, we didn’t get our money back either and later J noticed that the ticket price was TL2 – the sod had ripped us off! Burası Türkiye!’

ps as this beautiful mosque is fairly close to our mountain cabin hidey-hole we regularly take friends to see it. Since this post was written there has been some very careful, well-crafted restoration work carried out including the beautiful alabaster stained glass windows. The building is now good for another two hundred years.