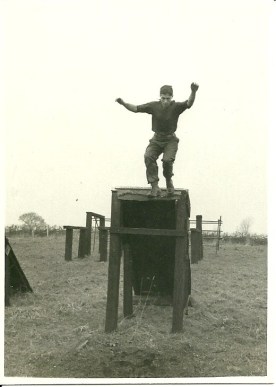 Back in the dim and distant past in those wild, halcyon days of my youth, I took the Queen’s shilling and signed up to be a parachute soldier. Looking back, me and my mates were like putty in the hands of the training staff as they set about the task of moulding us into something that resembled ‘useful’ and ‘fit for purpose’.

Some of this stuff they drummed into us was ‘biblical’ in nature and profoundly important when you consider that most of us had never lived communally and a ‘bosom-buddy’ was a whole new concept. Apart, that is, from what I’d hoped Stella, who lived three doors away, would let me be without making too much fuss – but I digress. Biblical as in ‘thou shalt not steal’ – ever, end of story! Understood? Good!

That said, as with any good religious doctrine, there is always some wriggle-room – things are seldom as they seem and words can be open to interpretation. So it was that I learned and absorbed the lesson that there are always things that airborne soldiers need that others are unwilling to share or hand over. That being the case these things have to be ‘acquired’ in order to meet said needs. Stealing is a mortal sin, whilst ‘acquiring’ things is a virtue much to be admired and nurtured. Perfectly logical if you think about it for a moment.

And that brings me to the meat of this story which is about ‘acquiring’ a bell, its origins and a fascinating tale of glamour and daring-do.

I have an original warship’s bell which has been in my possession since the 1960s. The bell carries the name ‘Teazer’ without ‘HMS’ which I understand was normal practice for wartime builds. Its history after removal from the ship goes something like this; at some point in the early 1950s it became the fire bell at the Depot of the Parachute Regiment and Airborne Forces at Maida Barracks in Aldershot. It hung from a tripod outside the guardroom and in those days it gleamed! My first encounter with it was as a young recruit on guard duty.

Later, the Regimental Depot moved from Maida to the modern Browning Barracks with an electrical alarm system. The Provost Sergeant at the time was not an advocate of unnecessary ‘bull’ and the bell was hidden away in the back of a store cupboard. I was posted to the depot Regimental Provost staff in 1967 and succeeded in ‘acquiring’ the bell for ten shillings which was the price for the sergeant to look the other way. Before you start to moralise the bell was ‘acquired’ and not stolen – there is a difference as I’ve already explained!

Anyway, this ramble has now moved on to a certain HMS Teazer, a Tumult Class destroyer that was commissioned into the 1st Emergency Flotilla in September 1943. She and her crew saw action in the Mediterranean, Aegean, Adriatic and the landings in the South of France in 1944. In 1952 she was converted to a Type 16 frigate before being scrapped in 1965.

So, where does the ‘daring-do’ come into the story? Well, some of you will remember the film ‘Yangtse Incident’ made in 1957 and starring Richard Todd.

The film tells the true tale of HMS Amethyst, a British warship trapped and shelled by Communist troops in the midst of the Chinese Civil War whilst steaming up the Yangtse to Nanking. Many of her crew were killed and injured and the situation was dire – what followed was the stuff of legends as numerous rescue attempts were made by HM Ships Concord and Consort. The crew laboured to disguise the ship’s outline with timber and canvas and then slipped cable in the dead of night and using a local merchant ship to guide them passed through the shallows under the guns of the PLA forces.

In the film, which was made mostly on the Rivers Orwell and Stour on the Suffolk-Essex borders in SE England, HMS Teazer played the role of both Concord and Consort and one of the great moments is the sequence where she is shown turning at full speed and firing broadsides in the narrow confines of the estuary.

The Yangtse Incident was not Teazer’s only starring role, she went on to feature in ‘Bulldog Breed’ with Norman Wisdom and in ‘Petticoat Pirates’ with Charlie Drake. Then came a mention as the ship of ‘Ben Jackson’, played by Michael Craze, a companion of the first and second BBC Doctor Who series.

When the war ended the bell that now hangs at my door was removed and was replaced by a peacetime bell that now resides in Macclesfield Town Hall. The town has an association that goes back to wartime fund raising for this ship so it’s fitting that it should be there.

As for my ‘acquired’ bell, I think it’s fitting that it is hanging just a few miles away from the Aegean where HMS Teazer, a long-forgotten Tumult Class destroyer saw action and lived to tell many more lively tales.