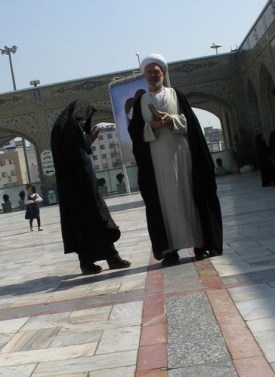 Mashad was an experiential disaster – a depressing waste of time and air fare! It is a fast-growing, modern city of two and a half  million people close to the Afghan and Turkmenistan border. Its name means ‘Place of Martyrs’ and its raison d’être is that the 8th Shiite imam, Ali al-Reza was murdered there 1200 years ago and it has become a place of pilgrimage as a result. The shrine is, after Mecca, the most visited place on the planet for Muslims with in excess of 20 million visitors each year. It is in a state of constant expansion, and whilst the tile-work is typically Iranian and pretty gorgeous the underlying concrete is not. The oldest and most important parts of the shrine are off-limits to non-muslims and to visit any parts require women to cover themselves with a burqa and stay separate from men – great for visitors from other cultures! The first photo sums the place up for me – a conversation where she can’t look at him and he won’t look at her! If you do decide to visit the bits that are open to you you will be escorted by an ‘indoctrination squad’  from the visitor information office.

Mashad lies along the ancient Silk Road and has been home to some of the renowned Persian poets like Ferdowsi, philosophers, artists and singers. 120kms to the west of the town is the shrine and grave of the great mathematician, astronomer, engineer and poet Omar Khayyám, assuredly a place worth an uncomfortable ride in a taxi to see. Nope! The biggest attraction was the display of oriental tea pots at the tea house! Take our advice and give Mashad a miss – the turbulence on the flight to get there was far more interesting than the destination!!

I said that I found Mashad depressing and so perhaps I should explain – the sight of thousands of brain-dead people, particularly women, giving in to ritualistic wailing and crying as soon as they enter the shrine of a bloke who was poisoned in 818 is enough to take away my will to live! This, along with other religious pageantry is beyond me and I despair for the future for humanity whenever it crosses my path. I have no problem with personal faith – that is a crutch that anyone is entitled to hobble along with, but please respect the rights of others, including orang-utangs, to manage without having it rammed in our faces!

On a positive note, we actually left Mashad by train after a couple of days! In the restaurant car we had the misfortune to be engaged in conversation by an imam. This imam was 71 years of age (our contemporary); he has studied the holy Qur’ån in the holy city of Qom for 50 of those years – a Koranic scholar indeed! And, he was asking us (I say ‘us’, but he wouldn’t look at J, even when she forced her way into the conversation) our opinion about why the Islamic Revolution had happened – a miscalculation on his part, perhaps! We expounded on recent history; the overthrow by the British and US of the first elected democratic Iranian government of Mohammed Mossadegh (photo) and the imposition of the despotic Riza Shah.

This followed by the leftist revolution that ousted the shah and then its takeover/sandbagging by the Islamists and the creation of the Islamic Republic. Factual history was not his strong point – he proceeded to deliver a lecture, sans all the murdered leftists, that had me ‘requesting’ that he shut up and let the interpreter interpret! Luckily for him, and us, the train stopped for everyone who wanted to get off for prayers and we never saw him again!

I realise that this is a disjointed way to tell a story, but I want to include the following because it is relevant to the ‘kindness of strangers’ in the title.

J and I were sitting in our hotel foyer in the city of Kerman when we were engaged in conversation by a very distinguished-looking gentleman by the name of Mohammed who was in town on business. Mohammed had been a fighter pilot in the Shah’s air force, had trained in the US and had fought during the Iran-Iraq War. Our conversation ranged over many things; internal and external politics; sanctions and the death of Mohammed’s wife just a few years earlier from cancer. Sanctions had deprived his wife of the treatments/medicines she needed to have a fighting chance of survival. It was a sad and disturbing tale related with great dignity and suppressed anger – not towards the peoples of the US and its so-called allies in the ‘innernashunal communidy’, but towards the war criminals who lead those countries.

Time flew and we were soon enough parting to get on with our day. We were visiting the delightful old bazaar and found, by chance, a wonderfully old and beautifully restored hamam that had been converted to a very popular local tea house. As we sat sipping and soaking up the atmosphere Mohammed walked in and we called him over. He ordered up tea and a water pipe and refreshing bowls of iced ‘pudding’ and more conversation flowed. He left just ahead of us and when we called the waiter over to settle up we found that our tab had been paid ‘by the gentleman who has just left’. A small kindness from someone who had, not long before, been a stranger.

Keep that in mind as we get this disjointed post back on track:

Compare and contrast this with the town of Shãhrud where we hopped off the train for a couple of days’ excursions to the mountains and deserts. Shãhrud is a delight of water and trees and ordinariness. It sits at the base of the mountains by the edge of the great desert and there is much to see and enjoy. I want to concentrate on our drive out into the desert. We spent quite a lot of time observing and photographing camels! There are loads of them wandering about being nice to their babies and dust bathing!

We eventually turned up at a gate to a compound in a deserted village and tooted our horn. A camel checked us out, followed by a herder.

We were invited in to examine the stock of youngsters and then to drink tea with him and his nephew at his home. His house was a breeze block hovel; dirt floor; smoke-blackened walls; plastic carpet. We settled down and made ourselves at home.

After he had set the teapot brewing he addressed J – ‘You are not from this country’ he said, ‘you are not used to wearing that thing’, indicating her scarf. ‘Please, you are in my home, make yourself comfortable and take it off if you would prefer’.

Can you feel my emotions as I write and you read this?

We went on to discuss, at his instigation, world affairs and sanctions in particular and how he couldn’t buy barley for his camels (this has been a hard time with lower than usual rainfall this year and so less for the animals to graze – they are thin).

What the f$%^ the US has against people with life-threatening illness and desperately poor camel herders in Iran is beyond me (and him) but we promised that we would at least blog about it, for what it is worth! All that said, what has stuck in our minds is the gentle hospitality, kindness and thoughtfulness of a camel herder and his nephew in the great desert of central Iran and the dignified widower in Kerman. May their god go with them and may barley and medicine, along with everything else, be removed from the list of embargoed goods, and may western, colonialist despotism be removed from the lives of people everywhere. Inşallah!

3 thoughts on “Iran Life – The Kindness Of Strangers”