Shãhrud is a little bit betwixt and between! It lies roughly halfway between the cities of Mashad, 500kms to the east, near the Afghanistan border and Tehran. As the crow flies, the Caspian Sea is a little over 100kms to the north west over the Arborz Mountains. South, as far as the imagination can imagine, lies the Dasht-e- Kavir, the mighty Salt Desert with the oasis cities and adobe fortresses of Yazd and Rãyen and Bam and the delightful Zein-o-din Caravanserai.

After the disappointment surrounding our time in Mashad, J and I were drawn to Shãhrud from the moment we stepped from the train. It felt . . ordinary, nice! That feeling was reinforced by our taxi-driver, Mansour, who readily agreed to be our guide-cum-country chef for our forays into mountains and desert over the next couple of days. What a pleasure it was to be with him – quiet, dignified and a superb barbecue chef!

So, what does Shãhrud have to recommend it apart from being . . nice . . and not being Mashad? Location! Drive out of town one way and you’re in the greenery of well-watered mountains – drive the other way and it’s sand and camels! There’s a very nice old Sufi mosque complex that’s been restored and a nice park with a man-made waterfall where J got taken over (in a very nice way) by a group of nice Turkmen ladies.

The town has water everywhere which is really nice and would have pleased Charlie Dimmock no end. Our hotel was nice too, although they didn’t have much idea about dealing with customers. Tourism has been slow for a number of years and not many travellers stop by. As we dragged our bags and gazed up at the sweat-inducing steps to the entrance, the porter-cum-reception guy helpfully pointed out the long-winding footpath before wandering back into the air-conditioned lounge! Nice!

Anyway, enough of this chit-chat – let’s get on with a few of our impressions of Shãhrud. I don’t know if we’ll have the chance to wind down our flowers, mountains and village life trip here when we return to Iran next Spring. That would be extra nice. 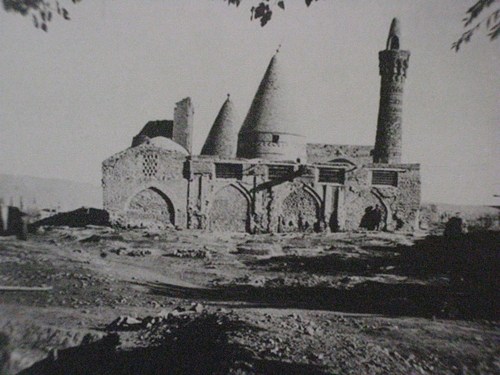 You can read about the desert bit of our stay here, now for some mountains and flowers – but mostly flowers!

I could go on and on with flowers – finally, the very best little restaurant in Shãhrud – the ‘Ariatin’. Lamb shank, buttered rice, green salad, borani (yogurt with mint) and ayran – simple and utterly delicious! 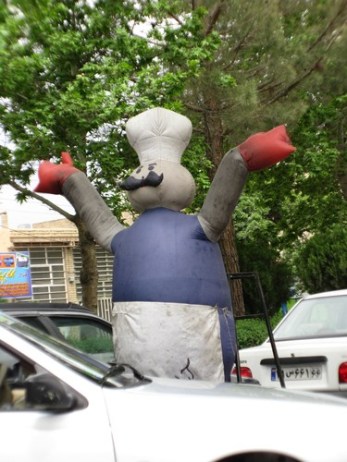 Sometimes, ‘Nice!‘ is so much nicer than ‘Amazing!’ or ‘Fantastic!’