Here we are, embarking on another journey through time, aboard the ‘Tardis’. On this adventure we head back to 2004 and a trip J and I made to Erzurum Province. One of the places we dipped into on route was at Boğazkale, site of the ancient Hittite capital of Hattuşuş. Join us as we wander around this amazing place . .

We arrived at the site pretty early in the morning – so early, in fact, that the guardian was nowhere to be seen. As the gates were open we drove in and followed the road as it curved around and climbed the hill that dominates the remains of the city. The view from the top puts the size of the place into perspective – it is vast! It also meant that we had the pleasure of watching the poor guardian, who had seen us enter whilst still eating his breakfast, racing along the roads to try and find us and ensure we paid the entrance fee.

The Hittite Empire once challenged both the Assyrian and Egyptian empires, controlling huge areas of Anatolia and northern Syria; and the scale of their capital city is awe inspiring. Huge earthworks, faced with millions of cut stone blocks, stretch for about 5 miles and literally changed the landscape! (A bit like Kent after the Channel Tunnel went through!) Originally eight tunnels or posterns, ranging from 70-120 mts in length, led through this massive fortification. These days only one is accessible and walking through the narrow, triangular, dry-stone construction left us very aware of all the tons of ramparts above us.

At the top is the much-photographed Lion Gate; what you see today is a reproduction, the original being in Ankara. The site really is ‘monumental’ with amazing reliefs of gods and kings and fantasmagorical beasts. The place was known as the City of a Thousand Gods for a good reason!

An additional bonus for me was that our visit was in Spring for Central Anatolia and the whole site, not to mention all the roadside verges, in fact everywhere is a botanist’s wet dream come true. I could have spent days just taking pics of flowers, so many and so beautiful! Another time. 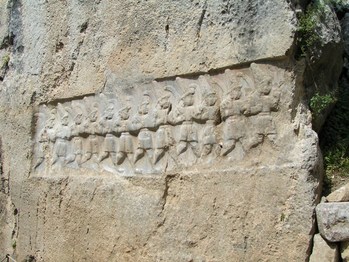 A quick drive along the processional way from Hattuşuş and we were at the sacred site of Yazilikaya where two small ravines contain the pantheon or temple site that has relief carvings of all (it is claimed) of the Hittite gods and goddesses. Here we were accosted by the inevitable ‘student of history who just happens to be staying with his brother who carves stone replicas, but didn’t want any money’ chap. He seemed pretty disappointed when his job description was proved correct! 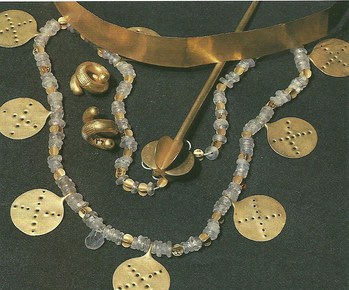 Then we were off to the place described as the most important Hittite site – Alacahöyük. Amazing finds were made here back in the 1930s when a bunch of royal burial chambers were excavated.You’d have to go to Ankara to see real things, but we were told that the site museum contained loads of other stuff as well as very convincing replicas of the original finds. The site is a bit of a detour to get to along pretty duff roads, so you can imagine our delight to find that the place had been closed since 2001 for ‘restoration’. Restoration my arse! I was pretty miffed to be charged TL4 million (2004, remember those days?) to view some supposed Winged Lions etc that turned out to be made of crumbling concrete!! The highlight of the site was a rusty old miner’s tilting trolly on six feet of rusting track! Burası Türkiye! This is Turkey!